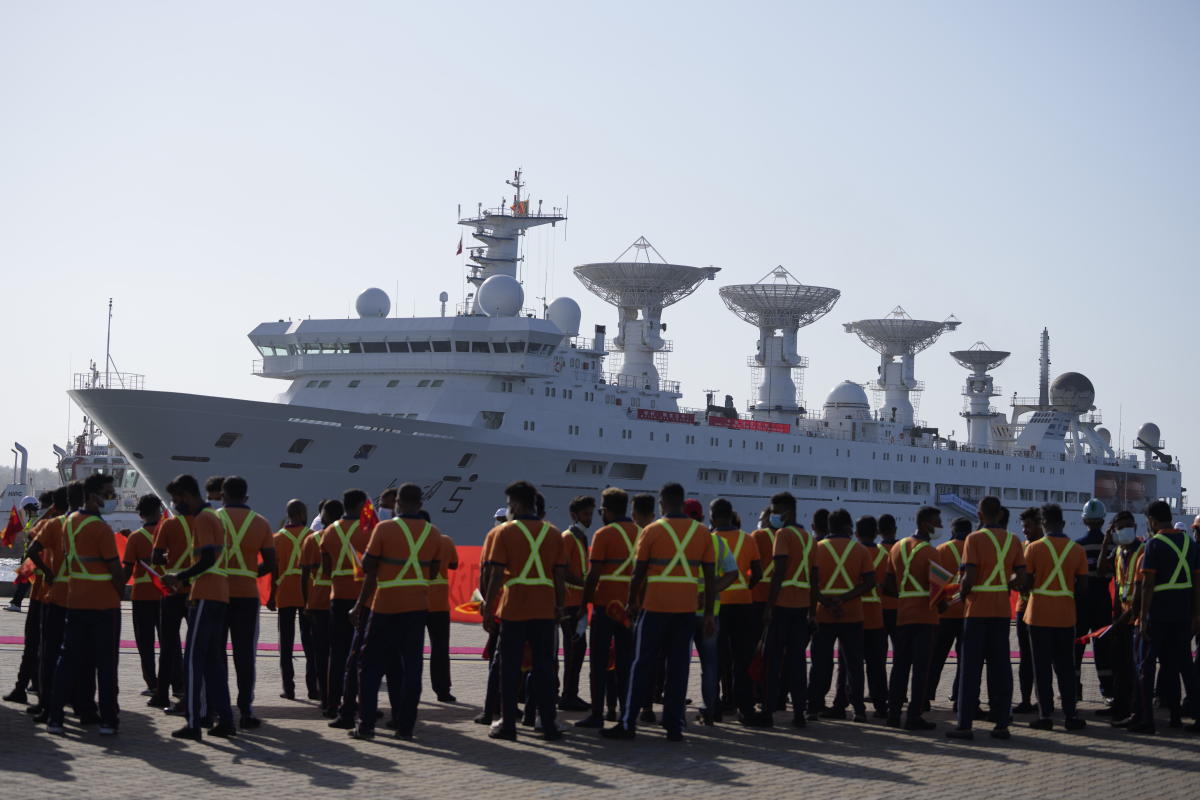 Yuan Wang 5 was welcomed by Sri Lankan port officials and Chinese officials from the ship company at the Hambantota port.

The ship was originally set to arrive Aug. 11 but Sri Lanka’s foreign ministry asked to postpone the docking until further consultations took place. The ministry said last weekend that the ship was given permission to dock in Hambantota until Aug. 22. It said the two sides had agreed the ship would keep its identification systems on and would not carry out any research activities while in Sri Lanka waters.

Sri Lanka said it was postponing the ship’s arrival because of concerns raised with the ministry but didn’t identify who had raised them. Security concerns of neighboring India over the ship’s proximity to its southern borders likely factor in.

India on Monday gifted a maritime reconnaissance aircraft to Sri Lanka to strengthen its maritime security. The Indian embassy said Sri Lanka’s navy and air force personnel who were trained India will operate the aircraft with operational support from Indian personnel.

“The aircraft would act as a force multiplier, enabling Sri Lanka to tackle multiple challenges such as human and drug trafficking, smuggling and other organized forms of crime in its coastal waters more effectively. Induction of the aircraft is timely in view of the current challenges to Sri Lanka’s maritime security,” the embassy said.

India’s foreign ministry spokesperson Arindam Bagchi said last week that India was aware of a planned visit by the vessel and that it carefully monitors any development that affects its security and economic interests and will take all measures to safeguard them.

China has been vying to expand its influence in Sri Lanka, which sits along one of the busiest shipping routes in what India considers part of its strategic backyard.

India has provided crucial assistance including food, fuel, medicines and cooking gas to the Indian Ocean nation as it struggles with an economic meltdown amid a severe foreign currency crisis. At the same time, China’s agreement to restructure its infrastructure loans to Sri Lanka is vital for the country to be able to reach a bailout program with the International Monetary Fund.

China has lent Sri Lanka billions of dollars for development projects, some of which have been criticized as having little practical use. They include Hambantota port, which Sri Lanka leased to China in 2017 because it could not pay back the loan.

“Given the geopolitical dynamics in the region and Sri Lanka’s heavy vulnerability on the economic front, Sri Lanka is playing with two fires at a diplomatic level,” said international affairs analyst Ranga Kalansooriya.

He said while Sri Lanka is unable to discount both the regional powers, its President Ranil Wickremesinghe is tasked not only with salvaging the country’s economy but also maintaining a diplomatic balance.

‘It is too fast’: Meridian officials slam Idaho Transportation Department over Eagle Road