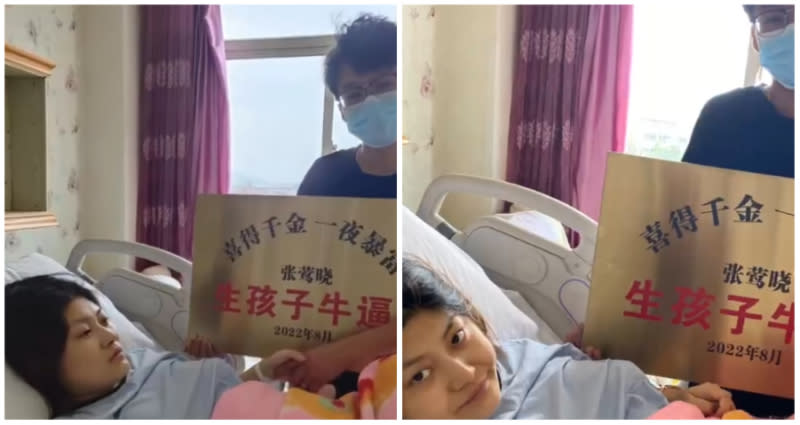 A husband in China has gone viral for commemorating his daughter’s birth with a large stainless steel plaque, continuing a romantic tradition between the couple.

The plaque was gifted by the husband, surnamed Li, to his wife after she gave birth to their daughter. It reads, “Congratulations on having a baby girl! Giving birth to a child is awesome, Zhang Yingxiao! August 2022.”

Since the plaque was created ahead of time, it mistakenly lists the daughter’s birth as August 2022 although she was born on July 31.

“My wife’s expected delivery date was August 6, but she started to have contractions on July 30 and gave birth to our child the next day,” Li told Wutong Video.

The couple, who reside in Yantai, Shandong province of eastern China, began their tradition of commemorating special occasions with stainless steel plaques in 2021. Li had sent his wife a plaque last year stating: “Our love is as strong as stainless steel! Zhang Yingxiao, I love you. 2021520.”

Stainless steel plaques have since become an inside joke between the couple.

“The plaques are a symbol of our deep love,” Li said. “This plaque can be kept forever, and it’s very meaningful.”

Li added that he was unable to afford a fancier plaque due to his limited budget.

Weibo users were left amused by Li’s gift, with some poking fun at the couple.

“The sense of ceremony is very important!” one user commented.

“Seeing the wife’s expression, she almost rolled her eyes,” another user wrote.

The video has garnered 4.5 million views and 60,000 likes since being uploaded on July 31.

More from NextShark: Woman in China cuts up shop’s 32 wedding dresses worth $11,000 after not getting her deposit back

Ted Cruz was right: Babies are super racist. A Supreme Court nominee should know that.