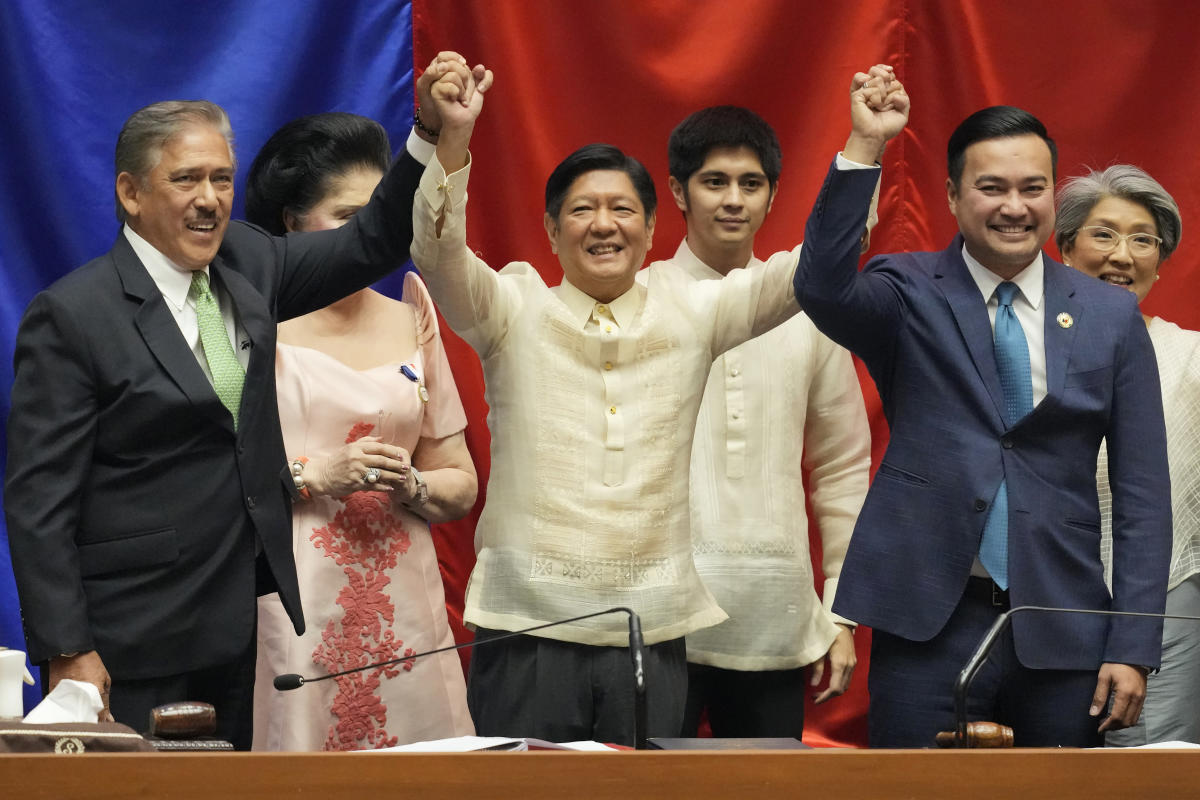 MANILA, Philippines (AP) — Ferdinand Marcos Jr. was proclaimed the next president of the Philippines by a joint session of Congress on Wednesday following a landslide election triumph 36 years after his dictator father was ousted in a pro-democracy uprising.

The Senate and House of Representatives also declared that his separately elected vice presidential running mate, Sara Duterte, had won by a wide margin. She is the daughter of outgoing President Rodrigo Duterte, whose turbulent six-year term ends on June 30.

They will lead a nation battered by COVID-19 lockdowns, crushing poverty, gaping inequality, Muslim and communist insurgencies, crime and political divisions further inflamed by the May 9 election.

With his 92-year-old mother, Imelda Marcos, his wife, family and siblings beside him, Marcos Jr.’s hands were raised by the Senate president and House speaker in a plenary hall bedecked with a huge Philippine flag to applause from the audience, which included diplomats.

“I’m humbled,” he later told reporters. “I thank our people and, beyond that, I promise you that we may not be perfect but we will always strive to perfection.”

“I ask you all pray for me, wish me well. I want to do well because when the president does well, the country does well,” he said, without taking any questions.

Marcos Jr., a 64-year-old former governor, congressman and senator, has refused to acknowledge or apologize for massive human rights violations and plunder under his father’s rule and has defended his legacy.

When they take office, Marcos Jr. and Sara Duterte will likely face demands to prosecute her father over thousands of killings of mostly poor suspects under his yearslong crackdown on illegal drugs. The deaths are currently under investigation by the International Criminal Court.

Marcos Jr. received more than 31 million votes and Sara Duterte more than 32 million out of more than 55 million votes cast in the election. It was the first majority presidential victory in the Asian democracy in decades.

During the campaign, they avoided controversial issues and focused on a call for national unity, although their fathers’ presidencies opened some of the most volatile divisions in the country’s history. Marcos Jr. appealed to be judged “not by my ancestors, but by my actions.”

Sen. Imee Marcos, his sister, thanked those who voted for him after what she described as decades of “ridicule and oppression.”

“We’re very, very grateful for a second chance,” she told reporters before the proclamation. “Our family went through a lot and after 1986, we faced all sorts of cases, ridicule and oppression” for nearly four decades.

Still, both have been hounded by their fathers’ reputations.

“Ferdinand Sr. tortured a lot of people, many were killed and many are still missing up to now. There is no justice for their families. Many starved and that was also the same in Duterte’s period,” protester Mimi Domingo said.

Last week, human rights activists submitted a petition to the Supreme Court against Marcos Jr.’s eligibility, citing his past tax conviction. They asked the court to block his proclamation, but no such order was issued. The complaint was earlier dismissed by the Commission on Elections.

His father was forced from power by a largely peaceful “People Power” uprising in 1986 and died in 1989 while in exile in Hawaii without admitting any wrongdoing, including accusations that he, his family and cronies amassed an estimated $5 billion to $10 billion while he was in power.

A Hawaii court later found him liable for human rights violations and awarded $2 billion from his estate to compensate more than 9,000 Filipinos who filed a lawsuit against him for torture, incarceration, extrajudicial killings and disappearances.

Imelda Marcos and her children were allowed to return to the Philippines in 1991 and worked on a stunning political comeback, helped by a well-funded social media campaign to refurbish the family name.

Along metropolitan Manila’s main avenue, democracy shrines and monuments erected after Marcos’ downfall stand prominently. The anniversary of his ouster is celebrated each year as a special national holiday, and a presidential commission that has worked for decades to recover ill-gotten wealth still exists.

Marcos Jr. has not explained how he will deal with such remainders of the past.

“History is at stake and that is probably, for me, one of the largest things at risk,” said Abad, whose activist father was detained after the dictator imposed martial law in 1972.