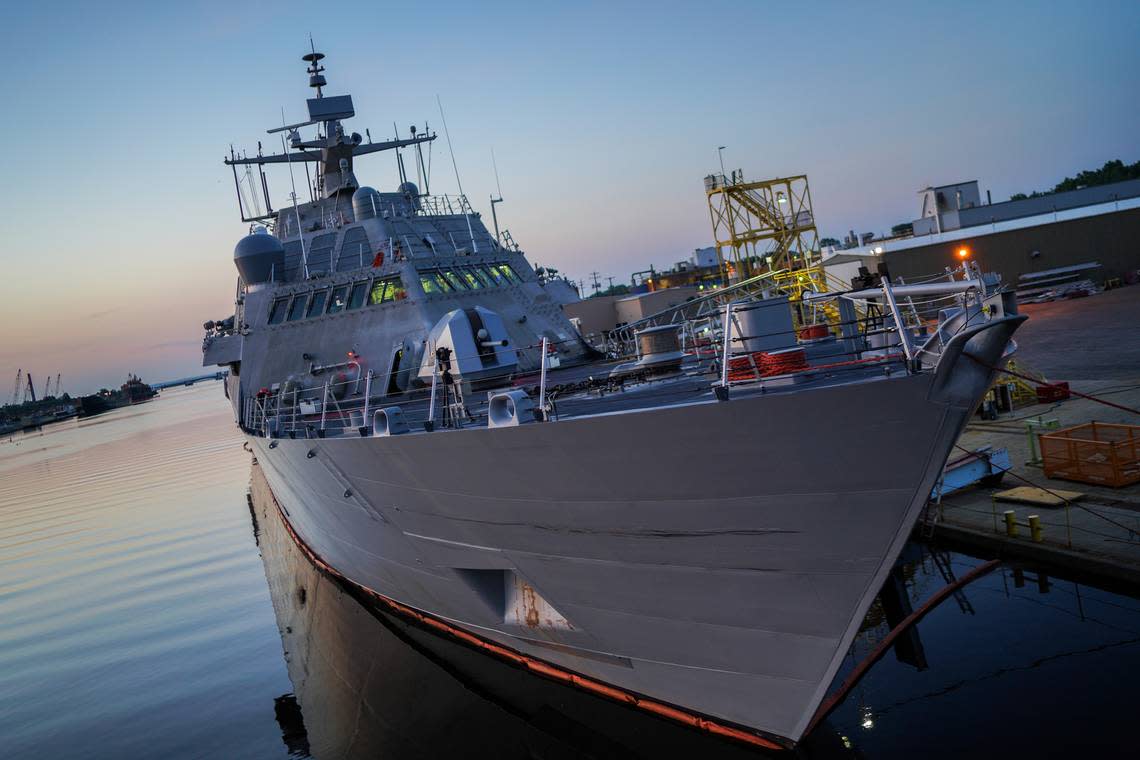 The USS Wichita is fighting for her life.

Not in combat, but in Congress.

The Navy plans to decommission the Wichita a mere three years after it joined the fleet, because it has the naval equivalent of a cranky transmission.

The Wichita was built by Lockheed-Martin at a cost of about $360 million. It’s part of the Freedom Class of “littoral combat ships,” built for shallow-water missions where larger warships can’t go.

The ships were designed for high speeds and to use “plug and play” modules to accomplish multiple missions, including surface combat, minesweeping and anti-submarine warfare.

But problems have surfaced in the complicated propulsion system that meshes power from two gas turbines and two diesel engines to support speeds reaching 45 knots.

The anti-sub module also had issues and was canceled in favor of shifting that capability to larger ships.

There have been no publicly reported propulsion issues with the Wichita, but problems arose on at least two other Freedom Class vessels and the Navy has determined the design flaw runs throughout the class.

Several military-focused publications have reported that the Wichita is on a list of ships that the Navy plans to scrap in its 2023 budget cycle, because retiring them is more cost-effective than repairing them.

That would free up roughly $4 billion of funding for more capable warships.

But the cost to our civic pride is incalculable.

The Wichita is the first ship named after a Kansas city since the nuclear sub USS Topeka was commissioned in 1989.

The Wichita flag is the ship’s battle ensign and its motto is “Keeper of the Sea” — a nod to our Keeper of the Plains statue by Blackbear Bosin, the enduring symbol of Wichita pride.

The Wichita City Council and Sedgwick County Commission gave $50,000 in local public money — augmented with additional tens of thousands in private donations — to help outfit the ship with amenities for its roughly 100-member crew, including exercise equipment, video games, laptop computers to communicate with families back home, even a barber chair.

A large delegation of local officials, business leaders and veterans trekked to Florida for the commissioning ceremonies in January, 2019.

Standing on the deck of the ship, then-Mayor Jeff Longwell pledged Wichita’s undying support for the ship and crew.

“Our community truly stands ready to adopt this ship, adopt them as our family,” he said. “We’re excited about being a part of them and making sure they have a support network from Wichita, Kansas.”

Sen. Jerry Moran, the keynote speaker at the commissioning, tied it to local Kansas values: “People of strength, love of country, people who persevere, people who demonstrate every day hard work,” he said. “I’m confident the crew, the crew of the USS Wichita, will demonstrate those traits regardless of the challenges that lie ahead.”

Wichita hosted the commander and a contingent of sailors from the ship at a Navy Days celebration in 2019 and has plans to do it again in September, now that the COVID-19 pandemic has abated.

The decision to scrap the Wichita and her sister ships is not yet final.

Bloomberg News reported that the Navy is facing pushback from some representatives and senators in congressional hearings scheduled for Tuesday and Wednesday.

Perhaps the Freedom Class can be saved.

The Navy reported four days ago that the Wichita just completed joint exercises with the Dominican Republic’s navy for interdiction of drug smuggling.

That makes sense. If the ship broke down chasing drug runners around the Caribbean and had to be towed back to port, well, that wouldn’t be the worst thing that ever happened in the Navy.

But it’s increasingly clear that the Wichita is unfit for the close-to-shore warfare and sub chasing roles it was built for.

And we have to be OK with that.

Decommissioning USS Wichita would be sad, no doubt.

But sending our young men and women into combat on a defective ship would be inexcusable.